UPDATE: New sugar free option at the end of this post.

UPDATE: Since posting this on Pinterest, a few people have commented that  this frosting deflated on them after a day at room temperature. I've never had this problem, because I live in a DRY climate, but those of you living in HUMID climates are having this problem. So... if you live in a humid climate, you'll need to store the frosted cake in the fridge.
~~~~~~~~~~~~~~~~~~~
This frosting recipe has a lot of things going for it. It is fast, super light, smooth and creamy on the tongue (very similar to a 7 minute frosting, but so much easier). Neatest of all, is that it is flavored with jello, so you can make it in ANY Jello flavor you like...watermelon? blueberry? pina colada? Kids will LOVE this frosting. 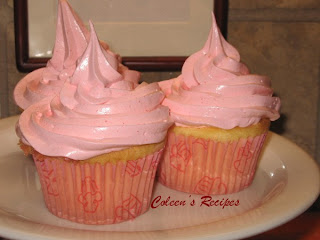 Place the Jello powder, granulated sugar, egg white and vanilla in a GLASS OR METAL mixing bowl of a stand mixer. DO NOT USE PLASTIC and make sure your glass or metal bowl is clean of any grease or oil.

Turn the mixer on HIGH and immediately add the half cup of BOILING water. Whip on high for five minutes and you will get this: 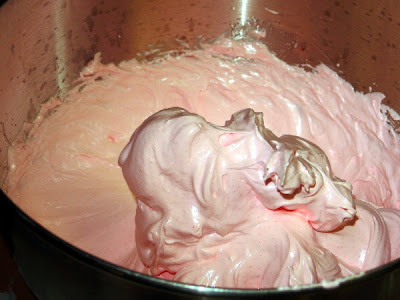 NOTE: This recipe only seems to work if you use a  stand mixer, with whisk attachment. Also, make sure you use a glass or metal mixing bowl, do not try this with a plastic bowl.

NOTE: Some people have commented that they don't think raw egg whites are safe for children to eat. The egg whites in this recipe are no longer raw after you add the BOILING WATER.

NOTE: This recipe makes enough to frost 24 cupcakes, or a 9 x 13 cake. If you are going to do any piping or edges, you might have to double the recipe.


NOTE: This frosting pipes beautifully and holds its shape well. Like any 7 minute type frosting, it does get a little sticky/tacky the second day, so its best if you make it the day you want to serve it. If you have to make it the night before, just store it in an airtight container that doesn't touch the frosting.


NOTE: This frosting has so many fun possibilities for birthday cakes/cupcakes. It would also make a wonderful filling.

Since putting this recipe on Pinterest, I have heard from several people who are wondering about the possibility of sugar free jello and Splenda...well, I had to try it.

First of all, we didn't like it as much as the original recipe (with regular jello and granulated sugar). The taste was good, but the texture of the sugar free version + Splenda was just a little too foamy for us (that didn't stop us from eating it though...lol)

I followed the original recipe, substituting exact amounts with the sugar free products 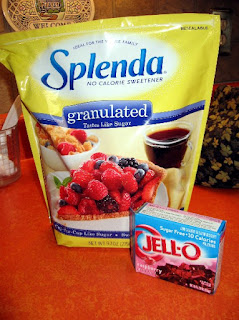 I used 2/3 cup of granulated Splenda, 1 egg white, 1 teaspoon vanilla and a small (4 serving) size box of sugar free jello.  I mixed those items together in my stand mixer and added 1/2 cup of BOILING (not just hot) water while the mixer was running on HIGH. Let the boiling water run down the inside of the mixing bowl, so it cools off a couple degree's before hitting the egg white.

Mix on HIGH setting for at least 5 minutes (will take longer if you are in a humid climate). After 5 minutes, my frosting looked like this: 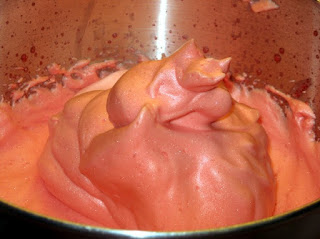 It was very foamy, and almost tasted like a sweet fruity meringue.  It still pipes nicely, here's an example: 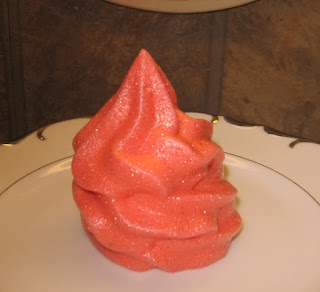 I'm  not sure whats up with the sparkle; the final frosting DID have a "fairy tale shine" to it, and I thought perhaps it might have a granular taste, but it didn't; it was very smooth.

It's hard to explain the mouth feel of this sugar free frosting, maybe a photo will help: 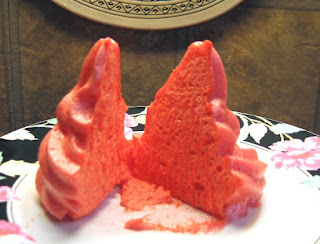 I cut the frosting sample in half... it tasted sort of like a cross between a sweet meringue and a wet marshmallow whip... does that make sense?

My conclusion: We liked the original recipe better, however, if your dietary concerns require a sugar free frosting, this is worth a try!!