For those people who are old enough to know what a Spudnut is...this recipe will be a treat. For those of you too young to remember Spudnuts...let's just say that they were the best donut in the universe. I heard that there are still a few Spudnut shops around, but it appears that they are few and far between.

This recipe (from the Idaho Potato Commission) makes a LOT of Spudnut-style donuts (about 4 dozen) so you might want to half the recipe if you decide to make them. If you are not experienced with yeast doughs, I don't recommend trying this recipe, however, if you have had even moderate success with yeast doughs, I hope you give the recipe a try (it is not a hard recipe at all).

The donuts are very moist, sweet and have just a HINT of lemon. My hubby is a donut (and Spudnut) connoisseur from way back, and he gave these donuts two thumbs up!!
2 pkgs. dry yeast
1/2 cup warm water
1 cup sugar
3/4 cup shortening (do not use butter)
1 & 1/2 cups cold instant mashed potatoes
3 eggs well beaten
2 cups scalded milk (cooled to luke warm)
1 tablespoon salt
1 tablespoon lemon extract
6 to 8 cups all purpose flour

Dissolve the yeast in the warm water and set aside. Cream the sugar and shortening and beat in the cold potatoes, eggs, cooled milk, yeast water, salt and lemon extract. Gradually add the flour to make a soft dough, knead well. The dough will be quite sticky, but holds together well. It should be a softer dough than bread dough.


Cover dough with plastic and let it raise in a warm place until doubled in size (this takes a huge bowl and about an hour). After an hour, pull dough out of bowl and onto the counter. Sprinkle with flour and knead it a little to get most of the air out of it. If dough seems really sticky, just flour your board. Roll the dough out to a half inch thickness. Cut with well-floured cutter.


Spray a piece of parchment paper (or waxed paper) with a little vegetable spray and then wipe it down with a paper towel. Cut the paper into squares and put a cut out donut on each square. This will help you when it is time to transfer the raised donuts from the counter to the hot oil (see notes).

Let the doughnuts raise until they get nice and puffy, then
deep fry the donuts in 375 degree vegetable oil until they are deep golden (mine took about 2 minutes a side). Only fry two or three donuts at a time.
Drain on paper towels. Glaze while still warm 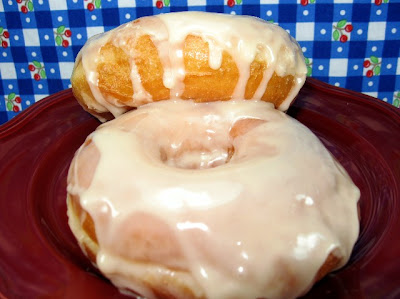 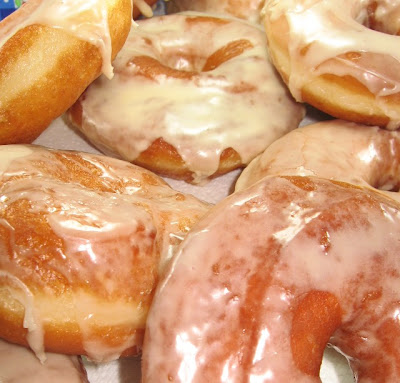 And don't forget the donut holes!!! 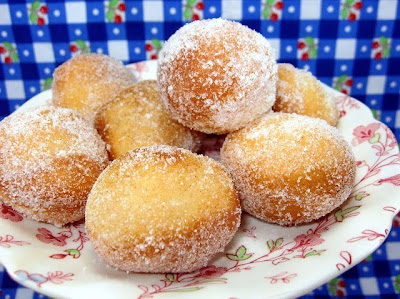 NOTE: Recipe calls for shortening, I used butter flavored Crisco.
NOTE: Recipe calls for prepared instant potatoes. I prepared my potatoes per the box instructions including water, milk, butter and salt.
NOTE: Recipe calls for a tablespoon of lemon extract. That sounds like a lot, but it leaves just a tiny HINT of lemon flavor in the final product.
NOTE: Recipe calls for 6-8 cups of flour. I used all 8 cups and it was no where near as "solid" as bread dough, so expect a sticky dough.
NOTE: I let my donuts raise on squares of sprayed parchment paper. If you do that, then you can pick up the donut without deforming or deflating it and gently turn it over in your hand and gently peel off the paper before you ease the donut into the hot oil.
NOTE: I have a 2" donut cutter, but it just seemed to make a very tiny donut, so I cut the bottom and top out of a pineapple can and used that as my cutter. I cut out the center of the donut with a tiny cookie cutter.
NOTE: I used my smallest electric frying pan with 3" of vegetable oil to fry these donuts. The electric fry pan allows you to easily adjust the oil to 375 degrees and since you should only fry two or three donuts at a time, the smaller electric fry pan makes sense.