Up until now...I have avoided homemade french fries because they don't turn out very well. In an attempt to make a "good" french fry, I've tried many potato varieties; I've tried various oils and temperatures; I've tried double frying them (what a hassle that was!) and I've tried baking them... they all come out of the oil LOOKING great but turn limp and greasy in a matter of minutes.

Then, recently, I came across this very simple recipe.  Assuming this technique was just "too easy" to produce great results, I didn't even mention the recipe "experiment" before I served them to Hubby. 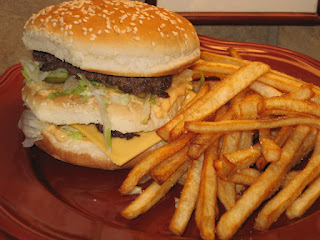 After about the third french fry, picky-picky hubby offered this unsolicited critique: "these fries are REALLY good"... I knew I had a winner.  I will definitely be using this super easy method the next time we decide to treat ourselves to some fries.

Slice the potatoes into shoestring size pieces, trying to make them as even as possible. Rinse the cut potatoes thoroughly and put them in a big bowl of plain cold water in the fridge until dinner time (at least an hour, but overnight is even better).

Take the potatoes out of the cold water and lay them on an absorbent towel, blotting most of the water off. Coat the potatoes lightly with the cornstarch and shake off the excess.  Let them air dry on a baking rack while the peanut oil heats up to 375°.

A WORD ABOUT THE OIL:  You will get the best french fries using peanut oil; it has a high scorch level and tastes great. You can also use regular vegetable oil, but avoid Canola oil. Canola oil tastes a little "off" if you bring it up to 375 degrees. I was surprised what a difference peanut oil makes.

When the oil reaches 375°, put a big handful of the cornstarch coated potatoes in the oil and stir gently to separate them.  After they've fried for a minute or so, stir them again to make sure they aren't sticking together (don't overcrowd your pan).

When the potatoes are light golden brown, take them out of the oil and put them on paper towels to wick away some of the oil. Sprinkle generously with KOSHER SALT (it tastes so much better than regular table salt on the french fries).

That's it!! No more limp, greasy french fries (and NO more double frying!!). Who knew that russet potatoes, a little soak time, a little corn starch and some peanut oil would make such a great french fry?!?!

NOTE ABOUT CUTTING THE POTATOES: Peel (or wash) the potatoes and cut the sides of the potatoes off (making sort of a rectangle). This will give your potato flat sides to rest on while you slice through the potato.  Stack the potato "slabs" and cut into shoestring size potatoes. 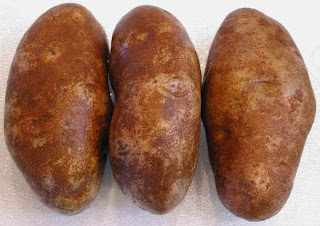 Russet's are those big baking potatoes.

Coleens Recipes
Cooking in my Alaskan Kitchen for 40+ years.